If you’re a regular listener to my live radio show, Author Assist on the Artist First Radio network, you know how the show works. Okay, sometimes I throw in a few surprises for my guest like making them sing, live on air and getting them to take part in a quiz, they knew nothing about.

Well, on the last show, Friday 8th April, I did two things I’ve never done before in the five years I’ve been on the air. I had a rant, and I cried. I’m not going to tell you what the rant was about or why I cried, you need to listen to the show and find out.
As well as those two monumental occurrences, we have awesome music from Lola Black and her hit single Hot Enough. Live readings from two of my flash fictions from my Collection, Heads & Tales, and my wonderful guest, Teri M Brown, who also does a reading for you.

So plenty of entertainment. You can listen to the archived show here.

Meet Teri M Brown. On the podcast Behind The Pen

Ans find out more about Lola Black and her music

I spoke with Maanarak about her soon-to-be debut book. As authors, we always give a lot of ourselves in our stories and many are biographical.

Maanarak goes even further by writing poetry and these are powerful words that she spins into a tale of past experiences. She opens up her heart and leaves it on the page. Such a gift many would love to possess. Not only does she write this amazing poetry but she illustrates using her unique style to tell the story of the poem. And she doesn’t stop there. With each poem, besides it, she tells the truth behind the words.

If it wasn’t bad enough bearing your soul in poetry, to then write the story of where the words came from, is truly inspiring and terrifying at the same time and I take my hat off to her, (if I was wearing one) for being brave enough to let it all out. She doesn’t hide behind make-believe she tells it exactly how it is and that makes it so raw and honest.
Come and meet Maanarak, the lady Behind The Pen.

You can find Maanarak on Instagram and listen for the announcement of when this more than poetry book will be published.
https://www.instagram.com/maanarak.4/ 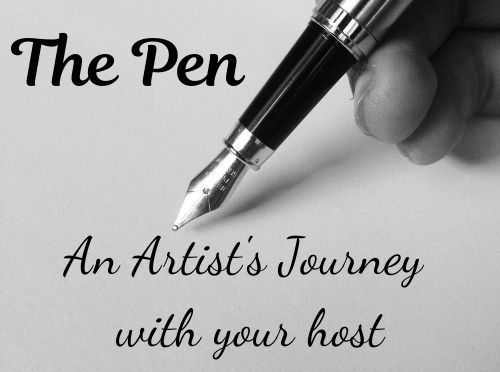 It’s not about money. It’s about giving your time, giving a smile to someone that needs it. Give first and you will receive.

When Sonia Cameron listened to the news and heard how many people we now unemployed in America, she felt so sad and wanted to help and so she wrote a book of prayer for those that are looking for work. Each prayer gives hope, inspires, gives determination and confidence.

I knew after just talking with Sonia for a few minutes, she isn’t just a passionate and caring person, she’s very smart as well.

You can find out more about her community work and where you can pick up her first book and the journal. A perfect companion.

About the book;
The book “The Story Of Dots…” is set against the backdrop of the author’s real life. It takes into account the experience that she had to handle in coping with friends, family, strangers, stranglers. It takes through a rollercoaster ride of the impact of social media. It talks about the voids in a person’s life and the need to grout it as & when required. It talks about the richness of the punctuations in English language specially the mere ‘dot’ with a focus on the power of words to make you feel low and high at different times. It takes you through the different time zones of the author’s life, all coinciding towards the fierce well, the dot. It encourages to fight the mental health issues created under the influence of the mingled yarns.

We all have heard of that phrase, ‘a friend in need is a friend indeed.’ Whenever there is trouble in life we always seek a friend who will listen to our problems.

But how many times can we express our feelings without having the fear of being judged by the same person? We can’t.

In the book named, ‘STORY OF DOTS…’ author Zarin Ali, starts by talking about her childhood memories and puts forward her various learnings so that we face our problems more consciously and make rational decisions at every step of our lives.

She beautifully explains the transition that she underwent while she was growing up, from being a child to a teenager, the way she became accustomed with the ways of the world.

The book, written in lucid language, is divided into nine chapters, is a must-read for all, especially the teenagers, who find it increasingly difficult to face the challenges in life.

Zarin Ali, is an author of Indian origin born in Ahmedabad. After having an illustrious academic career in KV Ballyganje, Kolkata, she pursued the Masters in Applied Geology from Jadavpur University, Kolkata in 2017. Ever since, she has been an active geolog

ist in Exploration with a passion for writing, acting in monologues, short films & modelling.

Watch the interview I have with Zarin

In this first episode of Go Indie Now’s show, The 3 Act Structure. Four authors talk about the act of outlining and plotting.

This is a fascinating video for both authors and readers to watch.

Have you ever had a terrible secret you didn’t want anyone to know? Petri does and it may get her killed. Life is hard on Upworld, especially for the residents of Under City, and it’s even harder for those who don’t fit in. Petri has alway been different and now those differences may cost her life. Her one hope is to leave the only home she’s ever known while evading the mob that’s calling for her blood. But Petri has never been outside of her sector of Under City, never mind off the planet. And the laws of Upworld forbid people like her from leaving. Will Petri overcome the odds and make good her escape? Maybe…with a little help from her friends.

This second installment in the Petri Dish Chronicles finds Petri and her friends traveling from planet to planet in Daji’s spaceship, the Ruba, searching for a new home. But it’s a challenge for Petri to find a place where she can be confident that the dangerous secrets she carries within her will remain hidden, and Daji is losing patience with her indecision. As tensions between Petri and Daji reach critical mass, the most frightening part of Petri’s past catches up with her, and the question facing the motley crew changes from, “where will they live?” to “will they survive?”

“Rainbow Dreams” by Mistral Dawn is a page-turner. You can’t help rooting for Petri, a struggling outcast in a cruel world. She’s a hybrid with forbidden powers and, when Petri came into her powers, “they hadn’t brought an instruction manual with them.” This creative alien world can be seen as mirroring the stratified society in our world. Upworlders have luxuries and security unknown to the struggling Underworlders. And for poor Upworlders, ”their one comfort in life” came from feeling better off than and superior to Underworlders. Plot, world, and characters are all excellent, and it’s nicely set up for a sequel. Well done!

I greatly enjoyed RAINBOW DREAMS, the Petri Dish Chronicles Book One. Such is my pessimism, that when I love the first book of a series, I often await its sequel with a little apprehension. “Will it be as good as its predecessor?” I worry. Thankfully, with Mistral Dawn’s latest, my fears were unjustified, emphatically so.

Firstly, I would like to echo the synopsis: it’s advisable to read the first book before the second. Sounds obvious, I know, but this is a true series; the characters develop significantly from the beginning of the first to the end of the second.

In a way, INTRINSIC CONNECTIONS is a departure from RAINBOW DREAMS – but not in a bad way. Sci-fi aficionados will be particularly impressed by the quality of the speculative thinking. Some of the ideas are, as far as I know, completely novel, which is an achievement in itself. The “bad guys”, the Arcanum, are superb, completely unlike anything I’ve read before. They might look like Area 51 style aliens, but their power is absolute. Daji, a feared Paka warrior, is puny compared to the Arcanum and its collective consciousness. However, it appears they may have met their match, in more ways than one.

Get ready for one hell of a story courtesy of the brilliant Mistral Dawn.

Make sure to check out her latest release. ARE YOU READY TO STEP INTO THE RABBIT HOLE?