The Last Bucelarii (Book 2): Lament of the Fallen
The Hunter of Voramis is no more.
Alone with the bloodthirsty voices in his head, fleeing the pain of loss, he has one objective; travel North to find her, the mystery woman who plagues his dreams and haunts his memories.When he stumbles upon a bandit attack, something within urges him to help. His actions set him at odds with the warrior priests commanded to hunt down the Bucelarii.

Left for dead, the Hunter must travel to Malandria to recover his stolen birthright. There, he is inexorably drawn into direct conflict with the Order of Midas, the faceless, nameless group of magicians that holds the city in a grip of terror. All while struggling to silence the ever-louder voice in his mind that drives him to kill. 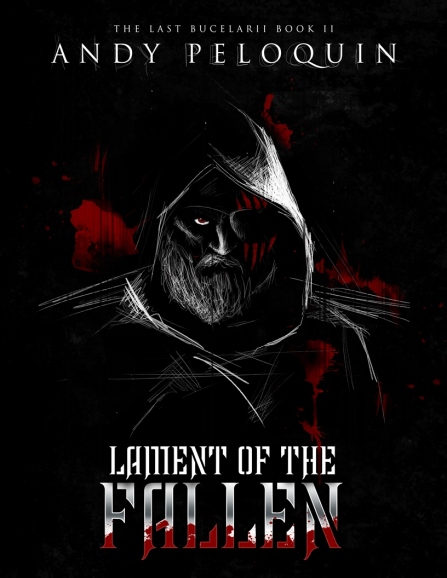 He filled his lungs with the fresh night air. The taste of smoke mixed with the earthy scent of loam. The warmth of the fire soothed and relaxed him, the hypnotic rhythm of the dancing flames calming his mind. The fatigue of the day washed over him, and he allowed his eyelids to droop.
The visions came then; memories leapt out at him.
Within the bright depths of the flames, he saw the hell he had glimpsed in the Serenii tunnels. Lord Jahel’s face appeared in the fire, laughing, mocking. Bone and skin morphed into the faces of Lord Cyrannius and the First of the Bloody Hand. Shuddering waves of flesh and gristle writhed, shifting, transforming.
Demons roam Einan once more. People treat them as myth and legend, but I know the truth.
The Hunter retreated deeper into his blankets, his sword clutched to his chest. He told himself it was out of habit rather than fear.
He had left Voramis behind, not only to find the truth of the woman whose face plagued him, but to discover the truth of the demons. Curiosity drove him to learn of his past, and his own heritage as a Bucelarii—descendant of the Abiarazi horde.
The demon added its voice to the swirling maelstrom in the Hunter’s mind. ‘He disowns his blood, all to play the hero, the protector.’
The Hunter was too tired to fight it off.
I’m no hero. If it was up to me, they’d all rot.
He had no desire to save the world. He had no reason to save humans from themselves.
A vision of horror flashed through his mind. Creatures of nightmares seized a screaming child, tearing at pale skin with razor-tipped claws. Blood splashed across chitinous armor as the demons ripped the child apart in their haste to devour the flesh.
The girl bore Farida’s face. She lay bloody, mangled, discarded like refuse, gasping her last agonizing breaths.
Oh, child. I am so sorry.
He wished he could scrub the memory from his mind forever. With it gone, the sorrow would leave. He needed no reminder that he was once again alone.
He turned his back on the fire and buried his face in his cloak.
He could turn his back on those who had feared and hated him, yet he had not the strength to hide his face from the suffering of innocents. People like Old Nan, Ellinor, Little Arlo. They would suffer most should the Abiarazi find their way into the world once more.
The demon whispered in his mind. ‘Why must you protect them? You are not one of them, after all. You are Bucelarii.’
They do not deserve such suffering.
He squeezed his eyes shut and pushed back against the demon’s voice.
I’m doing this for them.
He pictured Farida the way he had seen her that day in the Temple District, with that same bright smile. She was happy. That was what mattered, and that was what he would remember.
I’m doing this for her.

Fans of Joe Abercrombie, Brandon Sanderson, and Brent Weeks will love the Hunter…